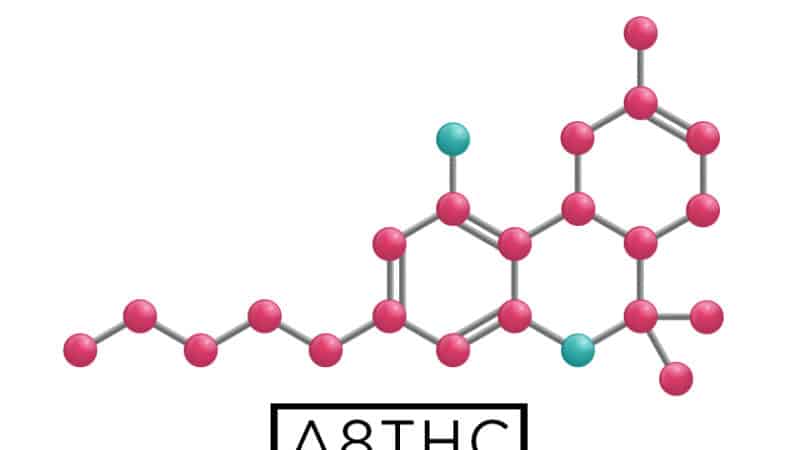 Many are familiar with delta-9 THC, but there’s a different variety of psychoactive cannabinoid, known as delta-8 THC which has its own set of therapeutic benefits.

Delta-9 often comes to mind when talking about THC. It’s what causes the intense psychoactive high that people experience after consuming cannabis. But, delta-9 THC isn’t the lone wolf when it comes to a cannabinoid which produces psychoactive effects. The lesser-known delta-8 THC is a double bond isomer of the more common delta-9 THC. Although it might not have the same strength of delta-9, delta-8 THC still has the ability of producing a high, with added therapeutic benefits.

Up until recently, clinical studies have focused on delta-9 THC, and even more recently, CBD. Researchers haven’t really focused on, or perhaps been aware of, delta-8 THC.

In 1974, government researchers conducted a study involving mice in order to determine if Delta-8 was harmful to the immune system. One unexpected discovery from this research was that the cannabinoid possessed cancer-killing abilities. It might seem like such a discovery would be noteworthy and prompt further research. Sadly, since this finding, little more than a few other studies involving delta-8 have been conducted. The public has been largely unaware of this discovery and it has taken decades for the government to come forth and admit that Delta-8 could kill cancer cells.

In a study conducted in 1995 by Shaare Zedek Hospital, Bikur Holim Hospital and the Hebrew University located in Jerusalem, delta-8 THC was administered to children with cancer. Dr. Raphael Mechoulam, was the head of the team that first discovered delta-9 THC. The creators of the study noted that at the same this research was occuring, there had been 480 successful treatments of cancer with delta-8 THC. An additional benefit was that the cannabinoid alleviated vomiting in many of the study participants.

In a report, by the National Cancer Institute, delta-8 THC, delta-9 THC and CBD were all shown to have the ability to stop tumor growth.

Over a decade ago, a couple of U.S. patents were filed which had instructions on how to get to delta-8 THC.

The first was a U.S. patent from 2004 with instructions on the conversion of CBD to delta-8 THC. The second patent involved the anti-emetic – an agent that has the ability to treat nausea and vomiting – uses of delta-8 THC and reviewed the active ingredients in the pharmaceutical composition used in research.

There are additional benefits.

Delta-8 is able to connect to the same CB1 receptor as delta-9 THC, as well as the CB2 receptor.

According to The National Cancer Institute, delta-8 THC is defined as “an analogue of tetrahydrocannabinol (THC) with antiemetic, anxiolytic, appetite-stimulating, analgesic and neuroprotective properties.”

The antiemetic properties of delta-8 THC are responsible for alleviating vomiting in the children in the study based in Jeruselum. The U. S. government has a patent on the antiemetic uses of delta-8.

In a 2004 study involving rodents treated with low doses of delta-8 THC, it was discovered that their appetites were stimulated more than those treated with delta-9.

Medications which inhibit anxiety are referred to as Anxiolytics. Delta-8 is much less likely to induce anxiety in high doses than its more widely known counterpart, delta-9 THC.

The 1995 study on children discovered that children are less prone to the anxiety that adults experience from high doses of THC. Because of this, researchers were able to give them larger doses of delta-8 without any harmful consequences. The study participants, aged 3 to 13, showed no signs of psychoactive effects after consuming delta-8 THC.

Based on the research for one of the patents of the cannabinoid, delta-8 THC has been shown to be 200 percent more effective as an antiemetic in comparison to Delta-9. In certain cases, it has even been found to be 3 to 10 times less potent than delta-9.

The research from Jerusalem illustrates how delta-8 has been used to treat hundreds of children with cancer. People who experience anxiousness every time they ingest high doses of delta-9 aren’t able to enjoy the cannabinoid’s medical benefits. Thankfully for them, delta-8 may be an alternative.