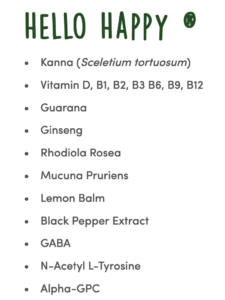 Looking for a natural way to feel better on a daily basis? Hello Kanna® was made for you!
Utilizing our proprietary natural “VBN Matrix” (Vitamins, Botanicals, and Nootropics) Hello Happy delivers a lift in mood unrivaled in today’s supplements, along with a powerful B-Vitamin Complex, any bouts of depression you feel will be swept away and replaced with a strong boost of happiness and increase in mood.

Kanna (aka canna or Sceletium tortuosum) is a succulent that’s native to South Africa. It has green leaves and blooms with white and yellow flowers. And it isn’t just a pretty plant. It’s a supplement that may help:

But are these potential health benefits legit? We found out what the science has to say about this supplement.

Kanna’s been used for centuries in South Africa as a traditional medicinal herb by San and Khoikhoi people. The plant can be chewed, brewed into teas, or smoked.

Traditionally, South African people use kanna to relieve anxiety or stress, quench their thirst, fight fatigue, or for healing and spiritual purposes.

European colonial farms used it as a psychotropic in tincture form (which means they soaked it in alcohol or vinegar).

Until relatively recently, the plant remained largely unknown outside of South Africa. It’s beginning to attract attention, though, because of the benefits it may offer (like promoting relaxation and boosting your mood).

Evidence behind its potential effects

Kanna’s popular for its effects on human mood. However, there aren’t many studies on kanna itself. Most research focuses on Zembrin, a supplement that’s made with the active compounds of kanna.

Here’s what we know right now about kanna’s effects.

The most common reason people use kanna is to ease anxiety and stress. The theory is that kanna can impact the amygdala. (That’s the part of the brain that processes fear and threat.) But does it actually work? That’s still unclear, but there has been some research surrounding the question.

A 2011 study involved restraining rats for a period of time. Some of the rats had the placebo, some were given kanna extract. The results showed a small positive effect on the anxiety levels of the restrained rats. FYI: These results don’t mean that the effect would be similar in humans.

One study with only 16 human participants did actually look at the effects of Zembrin. It found that the supplement reduced anxiety-related amygdala activity. This study is super small, though, so a lot more research is needed before researchers can be sure it actually works.

Some people say that Kanna can ease some physical pain, but there’s very limited scientific evidence to decide if this is true.

One 2014 study that involved rats suggests that there’s potential here. In these animals, scientists observed that there was some kind of pain-relieving effect. But that doesn’t mean it will help humans. More research is needed in this area.

Kanna may be a bit of a sedative. It could promote a sense of calm or even sleepiness in people who are stressed. Once again, though, scientific evidence that this is true is very minimal.

One 2016 study found some suggestions that kanna extract could have some beneficial effects on people’s stress and hypertension levels. But the study authors concluded that a lot more research was needed before firm conclusions could be drawn.

People claim that kanna boosts their mood and alleviates some of their symptoms of depression.

There’s a rat study on kanna extract that did show it had some antidepressant properties. However, it also caused a pretty big side effect in the rats, too, including ataxia. (Ataxia means they lost full control of their bodily movements.) Again, it’s not possible to conclude that this will happen in humans, but it’s something to keep in mind.

Some claim that kanna can help increase cognitive function. Others say it can boost your flexibility, memory, and reaction speed.

However, there’s very little scientific evidence to support these beliefs.

One study on rats showed some enhancement from kanna in the form of Zembrin, and one small trial on humans showed some promise of improving executive function, mood, and sleep.